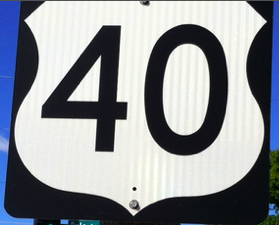 Letters. I get letters. Well, most of the time I get emails and texts, but sometimes I also get a letter. Recently I heard from my old friend and Maplewood history buff, Tom Bakersmith via email. Tom had this to say.

Lustron homes were designed to address America’s post-World War II housing shortage. They were and still are a factory-built, porcelain enamel, all-metal house. They were supposed to be maintenance free. I really don’t think they did, with the possible exception of the occasional wash (and wax?). I’ve never heard of anyone waxing one, but you know what your car looks like even if it sits in the driveway for a while. Lustron homes were invented by Carl Strandlund and manufactured in Columbus, Ohio between 1948 and 50. The manufacturing effort succeeded in producing just over 2,500 homes. This was far short of their goal of producing them in the tens of thousands. The company lost money on every house and went bankrupt in 1950. They left orders for 8,000 that were never filled.

These homes were ingeniously designed by Morris Beckmann of Chicago. The interior surfaces were all metal. The photos had to be hung on the metal walls with magnets. The roof shingles were all metal. Most had an oil furnace that heated the space above the metal ceilings. One idea whose time apparently hadn’t come and still hasn’t come was the clothes and dishwasher combo from a company called Thor. The motivating idea behind the design was to provide the occupying families with as much free time as possible since they would not have to spend time maintaining their homes.

Deer Creek Bar and Grill 3233 Laclede Station Road, was flooded about four feet high throughout the restaurant during Tuesday’s historic rainfall, the owners reported on social media. They plan to rebuild.

–How does Darth Vader like his toast? A: On the dark side.

It’s a joke du jour seen in Maplewood. In March 2020, when in-person school ended due to the pandemic, Maplewood couple Shelly Strickfaden and Joe Simonis started pranking on a lawn chair in their front yard at the corner of Marshall and Myrtle Avenues.

If you live in Maplewood, on a Wednesday morning, don’t be surprised to see a police officer walking down your street. Acting Maplewood Police Chief Matt Neighbor told block chiefs in an email it was for the “health and well-being” of officers and to give residents a chance to say hello.

The Maplewood Public Library is looking for new avenues of revenue to supplement the taxpayer money that currently supports the library. A large portion of the library’s budget is spent on staff costs, building maintenance, and lending materials such as books, DVDs, and e-books. In order to provide more programs for adults, children, and teens and to bring much-needed updates to the library building, the library will be hosting a cornhole fundraiser and is looking for volunteers to start a Friends of the Library group. .

A new cafe is planned for the location of the recently closed Stone Spiral Coffee and Curios (2500 Sutton Boulevard in Maplewood). The building was also sold.

Sarah Unsicker, the state representative for Shrewsbury and South, will be the representative for Maplewood, Brentwood and Richmond Heights if re-elected in November. She will be on the ballot here in place of Jo Doll in the August 2 primary election.

I’m dusting off another old post. Blame it on the long hours of daylight. This one first aired about 6 and a half years ago. We had wonderful old signs in Maplewood. Perhaps this message can spark some interest in their return.

Maplewood Community Development Manager Laura Miller reports that the electric vehicle charger, at two locations on the west end of the Marietta lot, is now operational. The spaces will be covered in green paint later this week.

The 16th Annual Let Them Eat Art Event in Maplewood takes place today, July 8, from 6-10 p.m. I had a lot to say about that last year, but this year…well…I’ve been busy.

Calling all DemoCats, RePuplicans and anyone looking to make their mark on the political landscape in Maplewood and Richmond Heights. Your time has come!