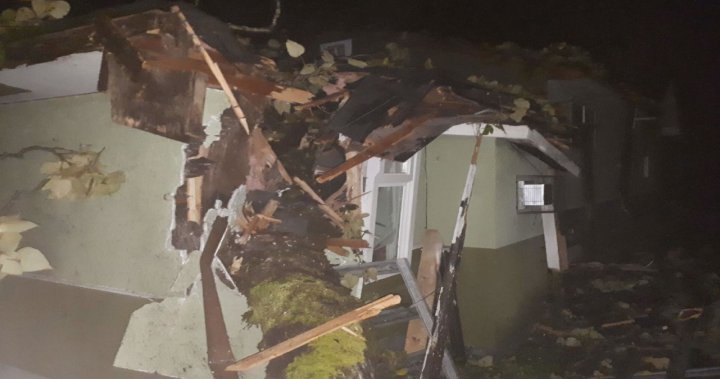 It’s been more than a week since a windstorm caused massive damage and power outages across the province.

A Maple Ridge family has now been relocated after a large tree destroyed their rental home.

“(We felt) a big boom hit the house and we thought it was an earthquake or lightning,” Amanda Koop said.

Maple Ridge’s mother, Amanda Koop, and her husband, Tj, are still in shock after a giant tree crashed into their rental home on Nov. 4.

The tree went through their daughter Audrey’s room. Fortunately, the family of seven was not in bed at the time.

The story continues under the ad

“We were very lucky to be all in the living room at this late hour,” Koop said.

For the past week, Amanda and Tj, along with their four children and her father, have been huddled outside the house, waiting to hear when their house can be repaired.

The family just moved into the house in August and were still unpacking their things.

And on Saturday afternoon, they received more bad news from their owner: they have to leave the house.

A GoFundMe page has been set up and for now the family say they are trying to stay positive, but at this stage they don’t know what will happen next.