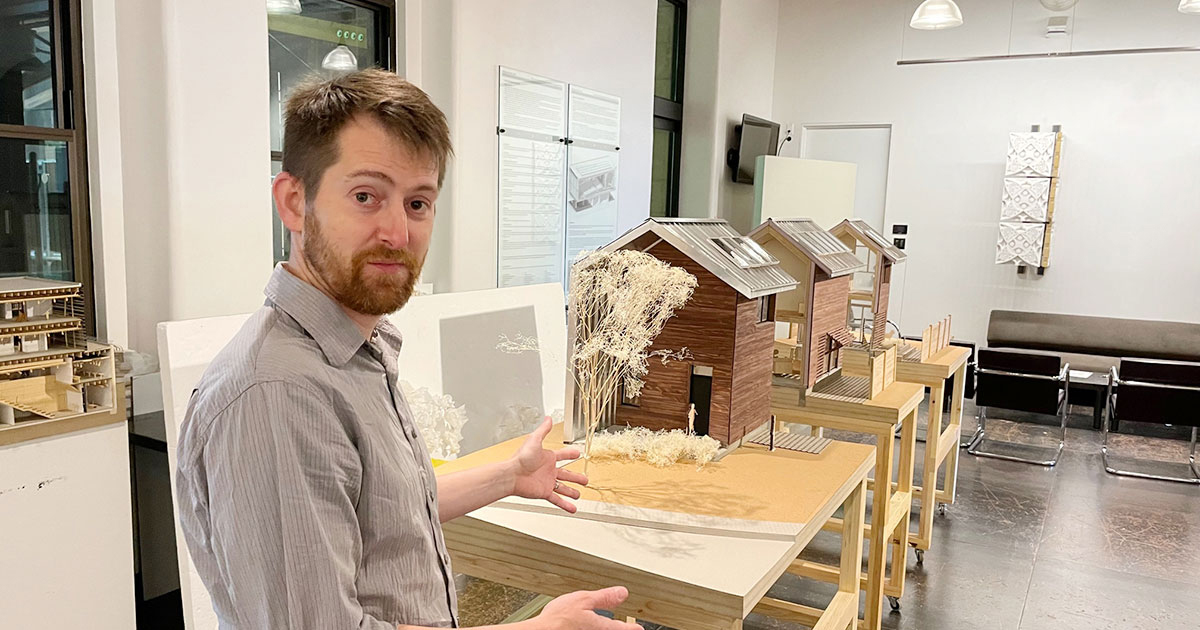 It’s the quadruple game that a Department of Energy award at the University of Kansas’ dirt works studio will catalyze next year in Kansas City, Kansas.

Dirt Works Studio, led by Chad Kraus, associate professor of architecture, received word that he was one of 14 applicants to gain approval to proceed and associated funding of $50,000 as part of the Build Challenge portion of the DOE’s 20th Annual Solar Decathlon. A year from now, the results of their work will be judged against those of other competitors, including teams from Pennsylvania State University, University of California at Berkeley and University of Colorado at Boulder. .

According to the DOE, the teams will work over a two-year period to design, build and operate homes in their own communities. Student work will culminate in April 2023 with the Solar Decathlon competition event at the National Renewable Energy Laboratory in Golden, Colorado. Finished houses must “demonstrate creative solutions to real problems in the building industry.” Teams will compete to earn points by successfully operating their homes and showcasing the excellence of their solutions to expert industry jurors. »

For Kraus, designing and building an ultra-energy-efficient home is a step up from the usual Dirt Works outdoor pavilion or interior renovation project.

“Since the mid-1990s when (Professor) Dan Rockhill started Workshop 804, we had a really strong design-build program – many would say one of the strongest in the country,” Kraus said. “So you would think we would have been entered into this competition, which is probably the most publicized design-build competition in the country.”

For various reasons, however, Kraus said, a KU team hadn’t. This year seemed like the right time, he said, and work began in the fall of 2021.

Kraus said DirtWorks Studio has partnered with a new nonprofit, The Good Work, which is dedicated to serving families in crisis, on the home building project. The Good Work owns the vacant lot in Kansas City’s Strawberry Hill neighborhood that Dirt Works will build on, and the organization will raise any additional money needed to complete the house, with an estimated budget of $300,000. The completed home will serve as a haven for a parent and their children fleeing abuse, Kraus said.

“It’s a narrow lot,” Kraus said, “so it’s very difficult to build on it because it was put in place at a time when the building codes were quite different. Now, you can’t even legally build on those lots unless you have a special provision, which they developed in Strawberry Hill, called their narrow lot design guidelines that allow for certain deviations from zoning codes. These guidelines include minimum setback distances from the street and neighbors’ property.

This lot, however, has other issues as well, including being near an interstate highway. So Dirt Works tries to turn those vices into virtues, using, for example, the southern exposure created by the expanse of the freeway to invite passive solar gain for heat inside the home. The geography also provides a spectacular view of the Kansas City, Missouri skyline from the new home’s master bedroom.

After the help of professionals pouring the foundations over the summer, approximately two dozen Dirt Works students will do most of the construction work themselves during the fall and spring semesters of 2022-2023. Once the building is complete, Dirt Works will operate the home for several weeks, measuring its energy efficiency for contest judging purposes. The goal is for the house to be “net zero » or better – that is, to create as much or more energy with its array of electric solar panels and other features that it uses. The house that finds the best balance between efficiency and elegance to solve all its design-build problems will be declared the winner.

Kraus said he can’t wait to see how this most ambitious Dirt Works project unfolds.

Picture: Chad Kraus with a model of the house that Dirt Works Studio will build in Kansas City, Kansas, as part of the 2023 Solar Decathlon Build Challenge. Credit: Rick Hellman, KU News Service.