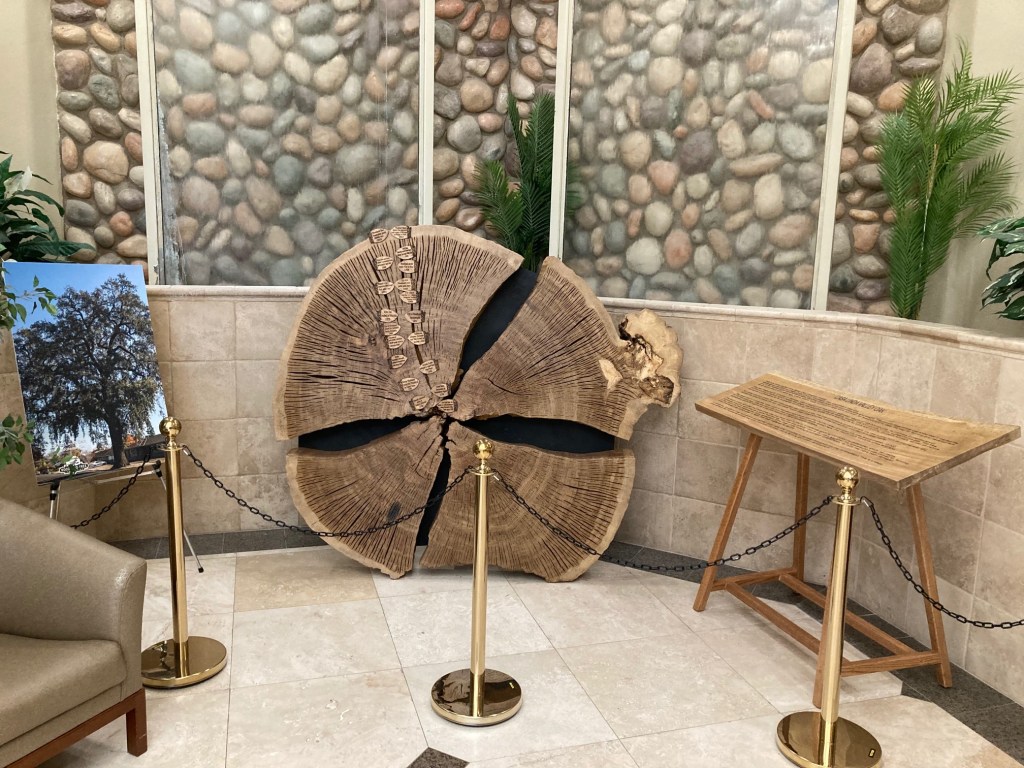 In 2021, Woodland lost one of its oldest and largest valley oaks, which began life as an acorn shoot some 270 years ago when California belonged to Spain.

Beginning its life in an oak savannah, the tree ended up shading a farm. However, by the time the land was subdivided in the 1950s for housing, the oak’s stature was so impressive that it was spared the axe, and Casa Linda Drive was built around it.

However, some of its roots were cut off to make way for the rue, which likely led to water infiltration and wood decay over the following decades, weakening the tree until it was dead. considered dangerous.

To honor this extraordinary tree, a group of community donors, led by the Woodland Tree Foundation, contributed funds to create a permanent monument from a cross-section of the Valley Oak. This magnificent tree was one of the tallest Oaks in Woodland, eclipsing most trees in its enormous size and weight. The growth rings of this tree show that it began life before the Declaration of Independence was written, a period before large numbers of oak trees were felled for firewood and to pave the way for the agriculture and development.

The tree was nearly 7 feet in diameter, with a height of 87 feet and an estimated weight of 146,000 pounds. Its biomass contained about 34,000 pounds of carbon, which means that this unique tree absorbed about 125,000 pounds of CO2 over its lifetime, a greenhouse gas that contributes to global warming. Additionally, the tree served as the cornerstone of its ecological community, providing shelter and a food source for birds, insects, wildlife, domestic animals as well as humans.

To create this monument, the massive cross-section of the tree trunk was kiln-dried at Street Tree Revival, an urban wood-recycling program of West Coast arborists. The loss of moisture content reduced the cut of the tree from its original size and caused the wood to break into four “pie slices”, which STR craftsmen skillfully sanded, polished and mounted on a sturdy steel frame. Additionally, significant dates in local, state and national history have been marked on the tree’s growth rings by the Tree Foundation.

City of Woodland staff member Eric Leggitt constructed a wooden stand for the context statement, which is carved from a thick piece of oak; it explains the history of the tree and serves as an educational exhibit for students and visitors to the community center. A photo of the oak tree, taken before it disappeared by Woodland photographer Susan Bovey, is also on display.

The fossil record shows that oaks from the Woodland Valley and surrounding Central Valley colonized this area about 10,000 to 15,000 years ago. This was around the time the Patwin natives were settling here. The Patwins were stewards of the land and harvested acorns sustainably as their primary food source for many thousands of years.

The acorn that grew the Casa Linda oak may have been buried by a California scrub jay (Aphelocoma californica), which can cache hundreds of acorns each year as a stored food source.

In 2018, the Woodland Tree Foundation counted 880 Valley Oak trees over 12 inches in diameter throughout the town of Woodland. This is a steep drop from the thousands of oak trees that once populated this area before agriculture and urban development.