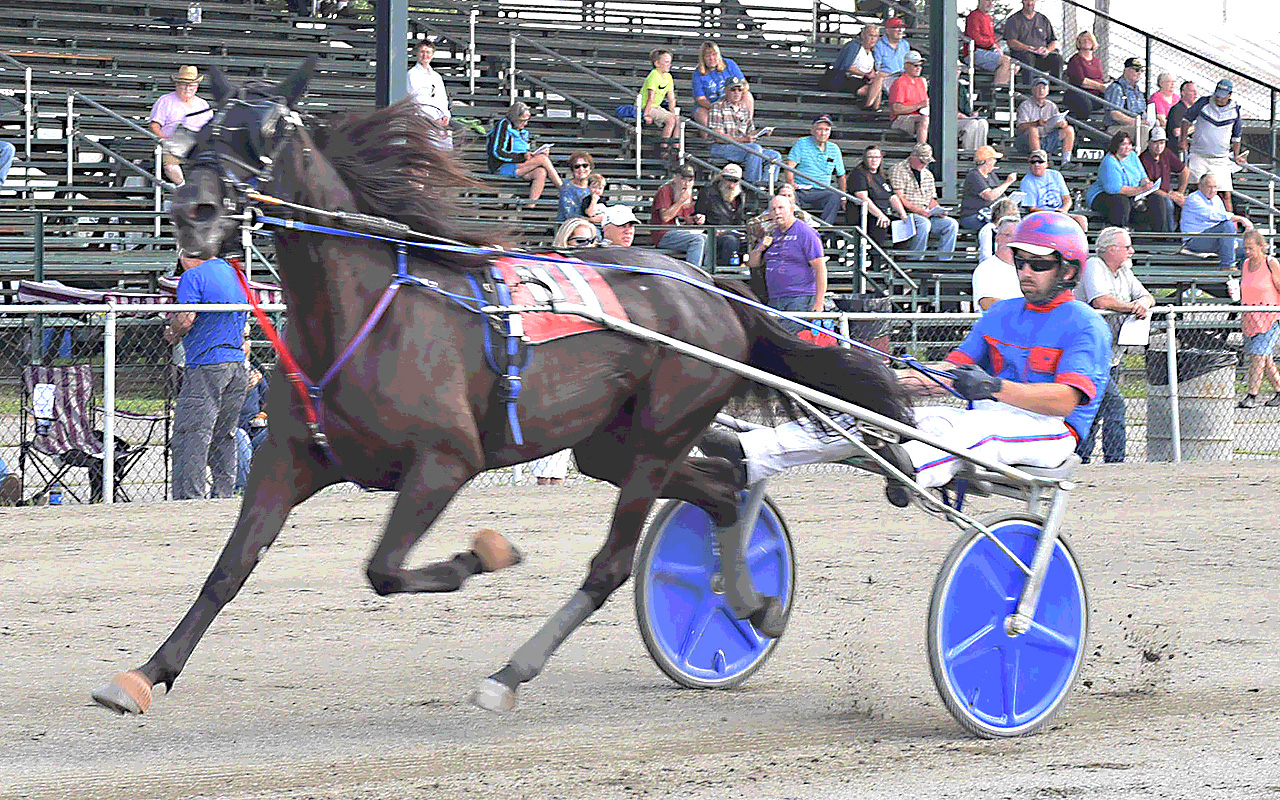 WINDSOR, ME – Both three-year-old divisions of Maine harness racing trotters won the top prize for their owners/breeders Saturday (Aug. 27) at the Windsor Fair, giving credo to the credo: “It pays to breed and run in Pine State! »

With purses at an all-time high and the perfect summer weather, Maplewood Slugger (Pembroke Slugger) managed to take a new lifetime mark of 2:01.1 while winning the $18,736 Maine Breeders Stakes (MSBS) for 3-year-old trotting fillies.

Starting from the pylon position for driver Andy Harrington, the filly was content to let Pembroke Honcho (Aaron Hall) smoke the car from post five and take the lead. Hall finally gave in to a Show No Tears (John Nason) who was parked in an opening panel of 29.4. Show No Tears cleared away moving towards a 1:00.3 half-mile marker and was trailed by stablemate Maplewood Slugger (also trained by John Nason).

At a three-quarter stanza of 1:31.1, the two fillies were side by side with Maplewood Slugger pointing a nose ahead at the head of the stretch and gained ground into the lane to win by three lengths for owner/breeder Maxine Hadlock.

Pembroke Booboo (Heath Campbell / Valerie Grondin), who was second behind the winner, finished second. Show No Tears hung on for third place.

In the 3-year-old MSBS $18,264 trotting colt and gelding division, Katahdin Mark (lofty adventure) and driver Gary Hall added another victory to his scorecard, making his sixth trip to the winner’s circle this season. Owned and bred by James and Betsey Kelley, the colt scored easily in a 2:02.2 wire-to-wire effort.

The $18,214 2-year-old colt and gelding trot saw Outlawofthevalley division leader and driver Kevin Switzer Jr. with trainer Marc Tardif do all the heavy lifting, but was caught in the stretch by Pembroke Traveler (Pembroke Slugger) (Heath Campbell / Valerie Grondin) who earned her first ever win in 2:04.3.

Pembroke Traveler is owned by Bill Varney and bred by Lynn-Marie Plouffe.

It was no surprise in the $17,884 2-year-old MSBS filly trot that She’salilbitmouthy (Victor Blue Chip) with pilot Mark Athearn and trainer Gretchen Athearn) shouted the loudest and longest. Despite a 2:08.3 walk, the filly only stretched as far as needed to win by 5-3/4 open lengths and clinch the fifth triumph of her career. Raised by Stephen Hall, She’salilbitmouthy is owned by Bill “Yarmouth Lumber” Phipps.

Windsor is one of Maine’s oldest and largest agricultural fairs, with the official opening on Sunday (August 28) when it will host 2-year-old pacing fillies, with freshman leaders heading out on Monday (29 august). The Windsor Fair runs until Labor Day (September 5).

The remaining MSBS show schedule is as follows:

Freiburg, from October 6 to 8

Maine’s sophomore finals return to Bangor for all MSBS 3-year-old division finals on October 15. The 2-Year-Old Championships will take place two weeks earlier on Saturday, October 1 at the Cumberland Fair.

by Chris Tully, for the Maine Breeders Stakes