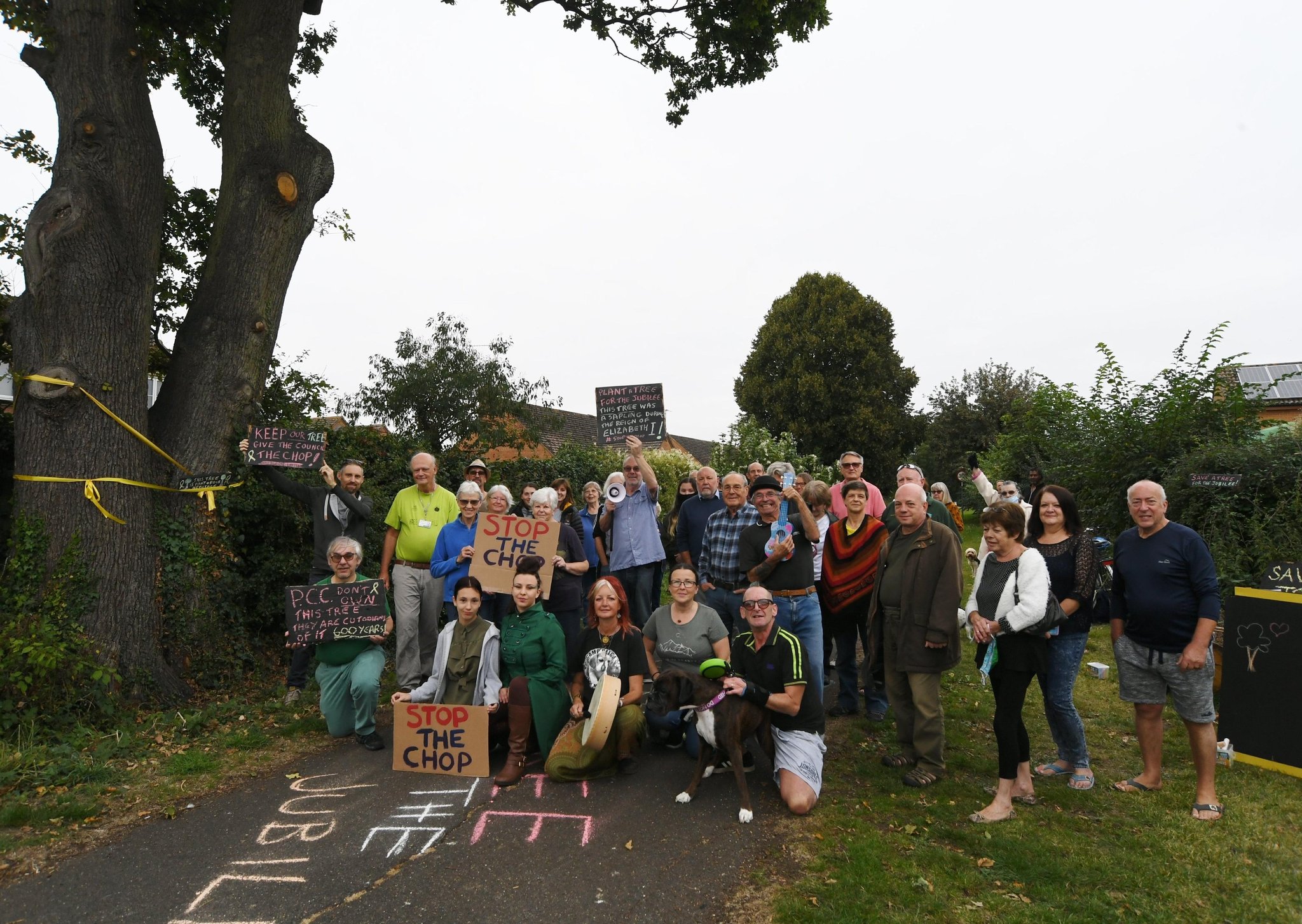 By: Daphine R. Frink
In: Oak tree
With: 0 Comments

Activists fought long and hard to protect the ancient oak, in Ringwood, Bretton, which has been around since around the 14th century and was part of the original Grimeshaw wood.

Peterborough City Council authorized its felling, despite the tree preservation order on one of the trunks, due to an insurance company claim that the roots caused damage to a nearby house .

Supporters of saving the tree are Peterborough MP Paul Bristow and leader of the Liberal Democrats on the council Cllr Nick Sandford.

Residents have already set up a 24 hour watch on the tree and on Saturday September 25 they gathered at 11 a.m. to express their views and were joined by Cllr Sandford and Bretton Cllr Parish Councilor Richard Strangward.

Protest leader Richard Elmer said: “Wayne Fitzgerald recently published a statement in the Peterborough Telegraph and said:” As a city aspiring to be Britain’s environmental capital, I cannot think of any better way to mark Her Majesty’s remarkable service than through the green canopy of Queens. The Platinum Jubilee will be a big year for the country and I know Peterborough will play its part in the celebrations. ‘

“I ask how can he say that on the one hand when the council wants to destroy one of the oldest trees in Bretton and possibly one of the oldest trees in Peterborough. The board has the power to satisfy all parties. They can save the tree and the house can stay. I think we have shown that the people of Peterborough are strongly opposed to the cutting of this tree. The petition on the Peterborough City Council website now has over 440 signatures in less than a week. The Change.org petition now has more than 2,300 signatures. I urge the council to listen to the opinion of its electorate and save this tree. We are not, in my opinion, the owner of this tree but simply the guardians of it at the moment. Remember that it has survived over six generations so far. It is a key species.

Peterborough MP Paul Bristow said: “I am not giving up hope that something can be done to save this beloved tree. It was here before the houses, and the Council must spare no effort to find an alternative to slaughter.

“The residents have done a great job preparing their campaign and they have my support. I cannot be there today because of a family commitment, but I am by their side.

“I have written and spoken with representatives of the council, and I promise to continue to do what I can to support this campaign. We can do it!”

The activists also distributed leaflets throughout the region, which further exposed their case. He said: “What started as a simple one-man protest to stop the felling of a healthy old oak tree has now grown into a movement in its own right.

“This particular oak has survived for hundreds of years and is one of the last oaks in the ancient Grimeshaw Forest on which Brettin is built. We live in harmony with these great trees and we must conserve them not only for future generations but for the environment today.

This tree has a CAVAT value of over £ 300,000, has a tree preservation ordinance and Peterborough City Council has given permission to cut it down. Reports have been submitted to the council which indicate that the cost of repairs to a neighboring property would range between £ 28.00 and £ 75,000 if the tree were to remain.

“For too long now, Peterborough City Council has removed old trees and hedges from our surroundings. We want to see Peterborough as the environmental capital that it claims to be. Replanting new trees is counterproductive if the council continues to remove our old trees from the city. Planting new trees will need to survive over 50 years before it begins to make a difference to our environment.