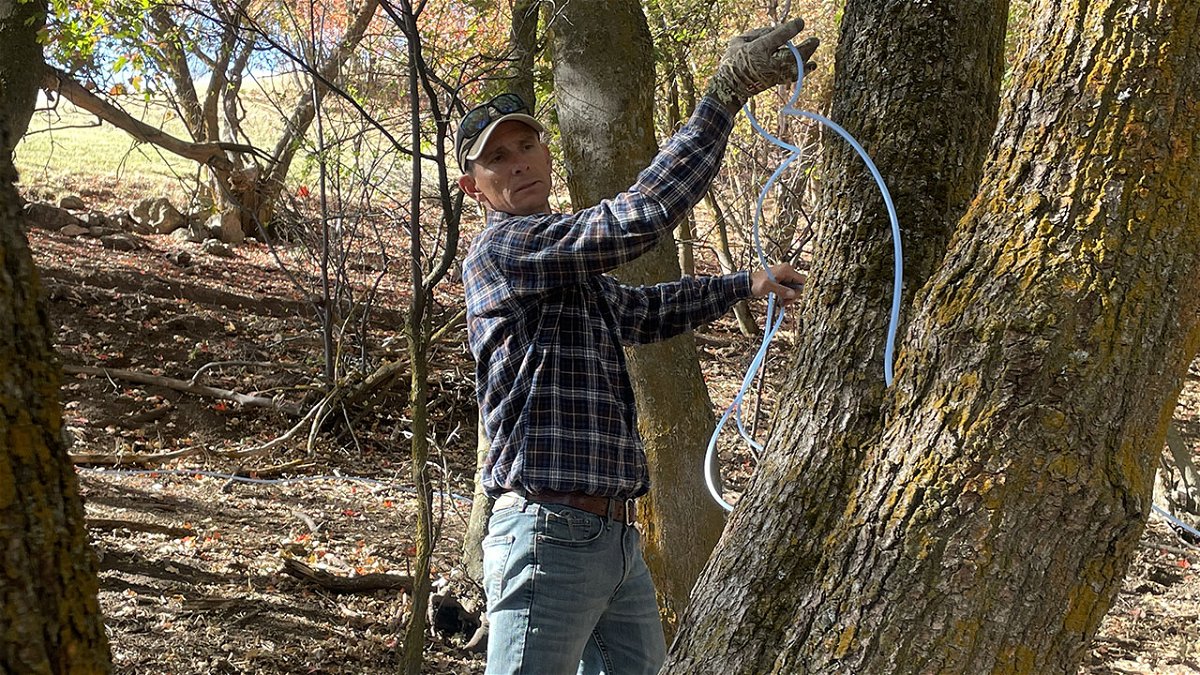 FRANKLIN COUNTY, Idaho (KIFI) – On a steep hill under a canopy of scarlet leaves, University of Idaho extension educator Bracken Henderson in Franklin County searched for the perfect grove of bigtooth maples.

About 25 meters upstream, his collaborators — Paul Harris, a research technician from the Center for Water-Efficient Landscaping at Utah State University (USU) and Jesse Mathews, a USU plant science graduate student — assessed the circumference of trunks in another grove.

Researchers are in the first year of a project to introduce a new niche agricultural industry to Intermountain West – locally sourced maple syrup and mountain maple syrup. USU received a three-year, $500,000 grant through Acer’s Access and Development Program under the USDA Agricultural Marketing Service to test the feasibility of commercial syrup production in parts of Idaho, Utah and Wyoming. With these funds, U of I received a $50,000 sub-grant to help with the effort, focusing on the foothills near Oxford, an isolated farming community of 48 people in southeast England. ‘Idaho.

On that crisp early October morning, the trio selected 30 of the largest maple trees they could find on a smug note and in close proximity to each other. They set up a network of rubber hoses connecting the trees to a central vessel at the base of the hill. In the spring, researchers will tap the trees to collect the sap, which Henderson will boil and reduce to make syrup. They hope to demonstrate to landowners that the profits they can make from selling syrup are worth their time and effort.

“Everything we offer is better than anyone in the state of Idaho,” Henderson assured Harris as they discussed the optimal setup for their tube network.

“Or in the West at all,” Harris added.

Henderson is working with two agricultural producers in Oxford who are looking for a new way to diversify their operations and their profits. Landowner Clark Cox has dairy and beef cows that graze his maple forest, and he also raises hay and grain. He is optimistic that producing maple syrup will provide him with a small source of income from a perennial resource.

“I hope to use the maple trees in another way rather than just for firewood,” Cox said. “We’ll leave them standing for beautification, but also use what they produce.”

Henderson thinks landowners could save time and cut costs by pooling their sap, boiling it together and marketing it under a common label. He is also interested in reverse osmosis as a way to remove much of the water from sap to reduce boiling time.

Henderson experimented last season tapping several trees, collecting the sap in buckets. His finished bigtooth maple syrup had a similar sugar content to eastern sugar maple syrup, and he was impressed with the flavor.

Using buckets, he collected about 30 liters of sap per tree throughout a single season, about half the yield of operations in major producing states such as Vermont. He had to boil 40 to 50 liters of sap to obtain a single liter of finished product.

The U.S. Forest Service estimates that Idaho has at least 2.1 million bigtooth maple trees large enough to harvest, with the best stands extending throughout eastern Idaho.

“There’s not a lot of research on maple syrup out west,” Henderson said. “Most of these trees, they wouldn’t exploit them in the East. They want chests 8 inches and larger, but we don’t have any here.

USU produced similar volume using buckets last season. The researchers, however, are optimistic that they will fare better this season with tips.

It takes about 30 trees growing close to each other on a slope with a 30 foot elevation difference between the tree at the top of the group and the vessel at the bottom to maximize the capacity of the tubes. Rather than relying solely on gravity to extract sap, as is the case with buckets, the tube system creates a vacuum to draw in additional sap, which should increase sap yields.

“I would love to see a maple syrup company from Utah or Idaho, but we’ll see,” Mathews said. “So far it’s taken a lot of time and effort for what we’ve gotten out of it, but this is the first year we’ve tried a tube system, so maybe that’s the way to go. TO DO.”

In addition to the Oxford properties, the University of Wyoming will work with test sites in Cowboy State, and USU is evaluating three sites in Utah’s Cache Valley. At one such location, Spanish Fork, Utah, discussions are underway about creating a community maple syrup festival.