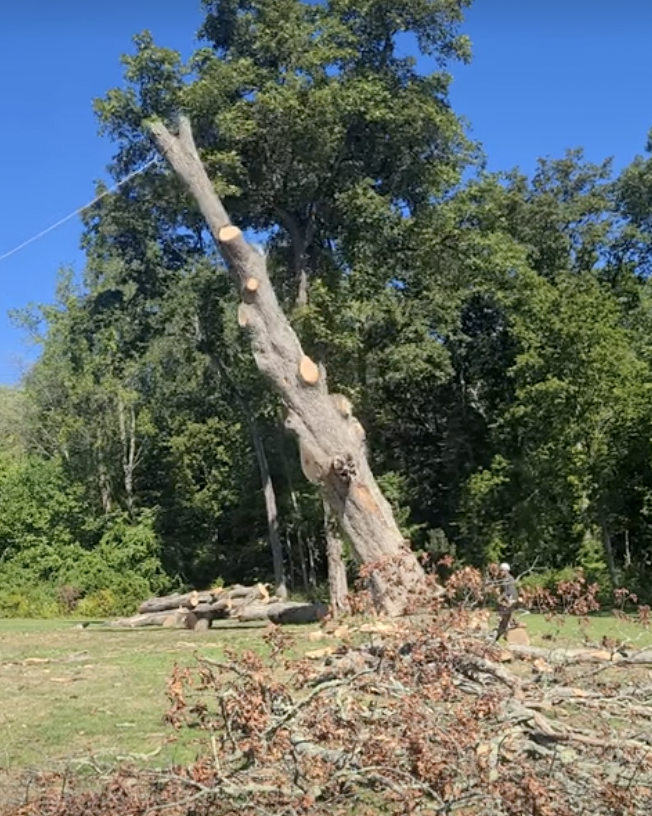 On Friday, authorities finished dismantling the dead white oak tree estimated to be 200 years old tree near Waveny Pond, setting up a months-long project in which its wood will be used to create a range of salable items to help support the park.

The Waveny Park Conservancy thinks the tree was the oldest in the entire park, according to Charles Crookenden, a member of the nonprofit’s board of directors.

“Unfortunately he had reached the end of his life,” Crookenden said. NewCanaanite.com. “We are replacing it with another white oak.” (The replacement tree will be 20 to 30 feet tall, officials say.)

In the meantime, the Conservancy — thanks to an idea by board member Chris Schipper — plans to dry and grind the wood from the tree to create several heritage and novelty products, as well as backless benches to place. in Waveny and oak planks for future projects, with any remaining wood to be chipped or cut into firewood.

According to Crookenden, the new products will include a Jenga set, breadboard, tray, and cellphone stand, all bearing the Waveny Park Conservancy logo and priced from $39 to $99. Tom Throop, a furniture designer who owns Black Brook Designs on Grove Street, is among the craftsmen who will be employed to help work with the freshly cut wood.

Proceeds from the sale of the products, along with sponsorships of the planned new benches, will go towards the Conservancy’s mission to “ensure that Waveny Park prospers in perpetuity and continues to inspire and serve the people of New Canaan forever.” “.

The wood products themselves will take six to nine months to materialize, as the wood must undergo a dehumidification process before milling (the WPC website will take pre-orders).

The project itself could also help give more visibility to the Waveny Park Conservancy, a nonprofit created in the summer of 2015 that works with the city to preserve and improve the park. In addition to numerous trail and signage improvements, major projects include the restoration of the pond at the base of the toboggan hill (renamed ‘Anderson Pond’) and the ongoing creation of ‘Jeniam Meadow’ where sledding equipment dredging of Mill and Mead ponds used for storage, an area formerly known as “the Cornfields” in the southeast corner of Waveny.

“I’ll tell you frankly that the Waveny Park Conservancy — people don’t know that,” Crookenden said. “It’s a relatively new organization. The idea came from Kevin Moynihan. They’ve done a damn good job in the last five or six years of their existence, but no one in town knows about it.

The Parks and Recreation Commission at its July meeting discussed possible future uses of dead oak, although the Conservancy has already formed its plan.