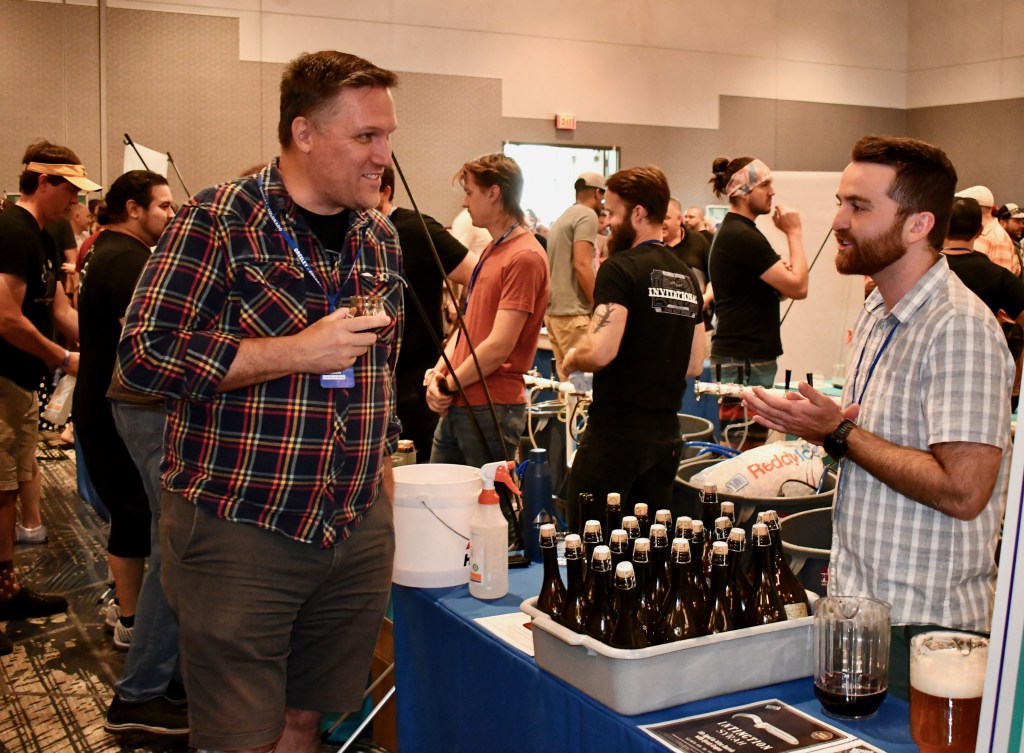 As cowboys and cowgirls slipped into their boots and saddled up to battle it out at various rodeo events Saturday at the Greeley Stampede, beer-lovers across the state and nation got gathered in downtown Greeley to polish their tasting glasses and wear necklaces made of pretzels to get down to business – the beer business, that is.

After two long dry years thanks to COVID, the WeldWerks Invitational Festival has returned to the DoubleTree by Hilton at Lincoln Park in downtown Greeley, featuring 50 breweries, including Side Project Brewing from Maplewood, Missouri; Russian River Brewing Company of Santa Rosa, California; Jester King of Austin, Texas, and more.

“As always, our brewing friends brought their A game to the Invitational,” said WeldWerks Head Brewer Skip Schwartz. “While the beer list features a good mix of barrel-aged beers that have become synonymous with the Invitational, this year we see a lot of brewers flexing their brewing prowess into the lager category. In fact, we will have more beers blondes at the Invitational this year than ever before.

Attendees were so eager to attend the festival that the line ran from the festival entrance along the Lincoln Park sidewalk and around the corner to 9th Street Plaza long before the first session.

While guests waited outside, brewers were busy inside frosting their arsenals of IPAs, stouts, beers, pilsners and other concoctions they had created for the event.

“The WeldWerks team has always been great and I’m good friends with Neil. Every time a friend invites you somewhere, you make the trip,” said Adam Martinez of The Lost Abbey in San Marcos, California. “Greeley is a great little town, and we’re thrilled to have another opportunity to be here.”

Martinez and the team at The Lost Abbey brought their Peach Afternoon, a barrel-aged sour with white peaches and white tea, and Libri Divini, a forage-aged golden sour, a French oak barrel, before being flavored with lemon and vanilla.

As soon as the clock struck 11, attendees enthusiastically flocked to the ballroom with one mission in mind: to try every beer in the room.

Beer lover Jeremy Pfeiffer flew in from Austin, Texas to attend the event. The timing worked perfectly as he could kill two birds with one stone by organizing some work-related tasks during the trip.

“I’ve been into beer for quite a while, and heard about it from friends who said I just had to make it here and try it at least once,” Pfeiffer said. “And yes, that’s why I’m here. A work trip came up so I extended it to come here.

While Pfeiffer is a fan of stouts, he was eager to see what other styles of beer the festival had to offer.

“I can’t wait to try several,” he laughed.

Located at the back of the room, the festival’s founding brewery, WeldWerks Brewing Co., was ready to showcase some fan favorites such as Medianoche, IPAs and a beer created to celebrate Neil Fisher, Sr.’s 60th birthday: Bob’s Birthday Blend Medianoche. Fisher, Sr. is the father of the owner and founder of the brewery.

“They picked a few barrels and mixed them together, and that was the idea,” Fisher, Sr. said.

WeldWerks launched its first invitational event in 2018, selling out its inaugural year and the following event in 2019. All proceeds raised from the event support the WeldWerks Community Foundation, the brewery’s non-profit organization. In 2019, the invite raised $50,000, which was distributed to 13 different local charities.

“To be able to bring the best beer from some of the best brewers in the country to little old Greeley is very surreal,” Schwartz said. “Especially after the two-year hiatus, I can’t say how much it means to us that our brewing friends take the time to hang out with us and pour their wares. This is going to look like the most awesome family reunion.

For more information about the WeldWerks Invitational Festival, the brewery, or other upcoming events and activities, go to www.weldwerks.com.

2022-06-26
Previous Post: What more can our forests support? – Times News Online
Next Post: 50 years in Fort Kearny, Gene Hunt “having too much fun” to retire | Local News